Pulpsploitation is back! Fear of the Reaper now available!

The second book in the Pulpsloitation series has arrived! Fear of the Reaper by Teel James Glenn is a new full-length Gunmaster tale for your reading pleasure! Head over to Amazon where it is now up and available for Kindle!


Posted by Nicholas Ahlhelm at 9:00 AM No comments:

A few thoughts on the new GUNMASTER by Teel James Glenn 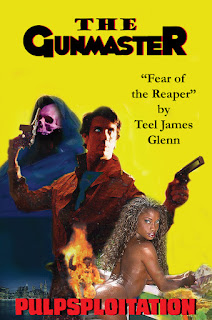 The Phantom. The Green Lama. The Destroyer.

Three heroes from three eras, yet all have hand in the thought process in the creation of Fear of the Reaper and the new Gunmaster as part of Pulpsloitation.

How you ask? All will be revealed in time:

Lee Falk’s the Phantom was arguably the very first masked/tights wearing hero in comic strips, debuting in 1936 . The saga of a generational hero who swears a sacred oath that he and his descendants will wipe out the scourge of piracy of the face of the earth is still ongoing with the mythology of his world continuing to expand. He has appeared in Strips, comic books, movie serials, a feature film and two television pilots!

The Green Lama was created by Kendall Foster Crossen (writing as Richard Foster) in 1940 as Munsey Publication’s answer to Street and Smith’s phenomenally successful Shadow pulp magazine.  Jethro Dumont (who masquerades as a Buddhist priest Dr. Pauli) becomes a Tibetan Buddhist monk who then returned to America to fight crime, using sills and attitudes he had learned in the Far East.  He often wore his green monk’s robes and used ‘radioactive salts’ that gave him the ability to zap the bad guys like a living taser!

The Green Lama appeared on radio and a slightly different version was a popular comic book drawn by the amazing Mac Rayboy. The pulp ceased in 1943 after fourteen excellent stories and the comic book ended in 1946, but the character has reappeared in new stories in both prose and in comics of late.

The final of the trio that influenced my work on The Gunmaster is The Destroyer (aka: Remo Williams). He was created by Warren Murphy and Richard Sapir in 1971 to both make fun of and cash in on the men’s adventure paperback book craze of the era.

The story of the worlds most perfect assassin tutored by an ancient master of the art of Sinanju is still going strong with the original writers bringing in ghost writers (most notably the prolific Will Murray) to continue the saga. There have been comic books, a feature film and a T. V. pilot.

How, you ask do these divergent influences feed into my version of The Gunmaster?  In a moment, but first a look at the original…

The original Gunmaster appeared in 10 issues of Clue and Real Clue Crime Stories in panel format and one text story. In that story the generation aspect (as per the Phantom) is already established in that the current Gunmaster Dumas Poe is a direct descendant of the monk who founded the order. The religious nature of the hero- also a Caucasian from Tibet like Dr. Pauli and also devoted to his cause with religious fervor also echoes the Green Lama, though he is dressed in an impeccable suit and tie and is more a detective hero or Saint clone. And, as it is a comic, there is no sex.

In ‘bringing up’ The Gunmaster to fit the mold of a 1980s men’s adventure style story as was Nick Ahlhelm’s idea for the Pulpsploitation line I felt I had to explore both the religious aspect of the story more deeply as well as ‘spice it up’ with some sex.

For the latter enter the stunning Majesty Blayde (her name alone a not to the amazing Modesty Blaise). Her relationship with the current (1980s) Gunmaster — Darian Poe, son of the 1940s version is intended to up the pheromone level of the story with a promise of more.

As for the religious aspect (and the mystical) I chose to explore an older Tibetan religion than Buddhism — Bon Po. Darian’s contact with the council by telepathy and some other aspects of the tale takes us into territory not yet explored.

I have more adventures in my mind and yet another generation of Gunmaster in the wings, so if you like what you see in Fear the Reaper, I hope you let us know…

Fear of the Reaper by Teel James Glenn is now available for pre-order on Amazon!

Posted by Nicholas Ahlhelm at 9:00 AM No comments: