The return of The Gunmaster! "Fear of the Reaper" hits on October 16th! 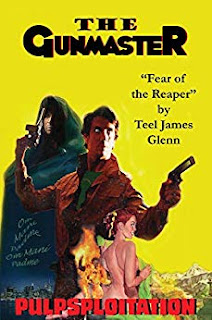 Metahuman Press is proud to announce our next release will be Teel James Glenn's first novel starring the character he introduced in the pages of Pulpsploitation. The Gunmaster is a Tibetan monk trained as the ultimate bullet-firing martial artist.

This time around his adventure takes him half way around the globe, all on the trail of the mysterious murderer known as The Reaper! Teel James Glenn unleashes the next phase of Pulpsploitation on October 16, but be sure to pre-order the book for Kindle!

People are dying, murdered by the mysterious Reaper and only Darian Poe, the legendary Gunmaster can find out who and why!

When an organization of weapons manufacturers fall one by one before the deadly Reaper it is up to the Gunmaster- from his base in Hong Kong and under the guidance of ancient masters of the Bonpo religion - to carry out his sacred trust, find the culprit and bring him to justice.

With the help of the sexy and spectacular Majesty Blayde - hottest freelance adventuress to ever shoot a jive turkey - The Gunmaster fights modern day buccaneers to save the world from both a horrible new and mythological ancient weapon too terrible to be imagined.

The bloody battle rages from a hidden sanitarium in the mountains of upstate New York to Hong Kong and ends at an ancient temple in the jungles of Cambodia. It is a journey that will test The Gunmaster like no opponent has ever tested any Gunmaster for many generations and the fate of the world at stake!

Written with all the punch and raunch of a 1980s men’s adventure novel Fear the Reaper continues the generational adventures of The Gunmaster- legendary figure who fights the proliferation of weapons of mass destruction in the world- from Pulpspotations “Praey for the Raven!” with nonstop action and thrills!

Stay tuned to Metahuman Press over the next few weeks as we bring you more details about the book and what the future holds for Pulpsploitation, MHP and beyond!
Posted by Nicholas Ahlhelm at 8:00 AM No comments: